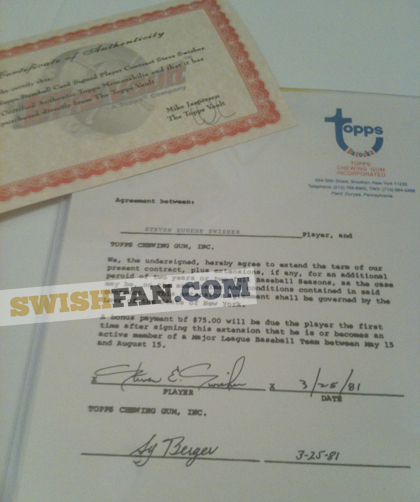 As a kid, I collected Jose Canseco, who had a twin brother who played baseball. Never knew that until after I started collecting — so it was a bonus.

As it turns out, Nick Swisher’s dad, Steve, played in the major leagues, too, and later managed in the minors. He was an All-Star (barely — good story there) and appears on 44 different baseball cards with his Rookie Card arriving in 1975 Topps.

While I can’t say I have tracked them all down — it wouldn’t be too tough so it’s on the eternal to-do list — I have picked up some interesting items here and there that I’ll showcase here from time to time.

He signed it on March 25, 1981, which makes it his last contract with the company and, for trivia’s sake, the only one signed after his future All-Star (barely — good story there, too) was born.