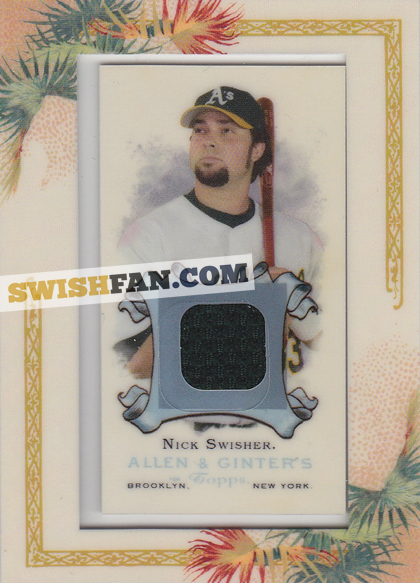 There are a lot of game-used Relic cards out there — and plenty for Nick Swisher just like most guys these days — but this set, these Allen & Ginter minis, are among my annual favorites.

This is Swish’s 2006 Allen & Ginter Relic, which has a piece of a game-used jersey embedded into the framed mini. I have plenty of them — and I’ll always pick up more of them when the price is right.

The first Ginter set will always be a favorite of many but the Relics have actually improved in little ways the last few years. So far, I have them all when it comes to Swisher.

I’m not the first owner of this Nick Swisher card, but I intend to be the last one.

It’s his only game-used memorabilia card that includes a full Logoman MLB logo from the back of his jersey, and it’s from the 2006 Ultimate Collection set. It hit the auction block a few years ago with a pricetag and timing that translated into one thing for me owning it: “No way.”

But It eventually found its way to me when the collector decided to part with most of the Swishes in his stash, selling at a loss, and now it’s mine. It’s not without some minor flaws — a sticker auto with the ink running off and the crooked authentication sticker — but it’s my priciest Swish.

It’s a 1/1 card that also has a Logoman and autograph of Rich Harden, another former A’s player, on the back.

Here is where, from time to time, I will post images and brief descriptions of the Nick Swisher cards and memorabilia in my collection. Over time, my goal to have everything in the stash documented right here.